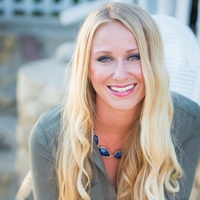 Erin was born and raised in sunny Ventura, CA which is where she still resides today, along with her extended family. They are a tight niche group and as an identical twin, she has always had her best friend by her side.  Her other best friend, and second half, is her husband Chris who works for the Santa Barbara County Fire Department as an Engineer. She grew up loving the outdoors and playing sports, training her way up to being a competitive gymnast, and then a high school and college volleyball player.  Her parents were great at exposing their kids to as much as they could, so Erin has great memories of camping, summer trips to the National Parks, acting lessons, museum trips, theme parks, and making lots of art.  She thought being an artist was her dream job, but it turns out it is more enjoyably a hobby.  In 2007, she went to Cal Poly State University in San Luis Obispo and majored in Nutrition Science, after becoming passionate about nutrition and health at Ventura College.  After working in the clinical setting at Cottage Hospital in Santa Barbara, as well as in the educational setting at several schools in San Luis Obispo, she decided getting her Registered Dietitian credential was important.  She completed a yearlong internship through the University of Northern Colorado in 2013 and was granted her coveted RDN (Registered Dietitian Nutritionist) credential. She worked for the Foodbank of Santa Barbara County as their Nutrition Program Manager, creating curricula and planning nutrition related events and cooking courses, until she had her first daughter Sierra in 2015 who is now seven. Two years later, she and Chris had their second daughter Shasta.

She has spent the last 7 years soaking up all the treasures that come along with raising kids. Being a mom is her most prized job so far, but like many stay at home moms, over the years she yearned for something more. In all her positions, she realized she had a passion for planning beautiful events, fostering social interactions, and building relationships.  After meeting Gaea in 2018, she and Erin, along with their kiddos, quickly became friends. Gaea was instrumental in encouraging Erin to work along side her to help her support her amazing clients. She is beyond excited to immerse herself in the financial world and be a cheerleader for Gaea’s client’s personal and financial growth.